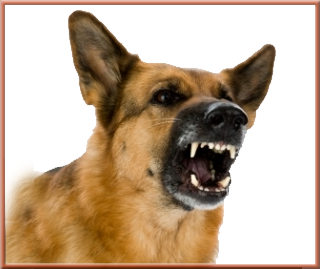 Those famous last words to the question, “Is your dog friendly?” I asked them that day as a large German shepherd left the side of its owner and walked toward me.

I was a dog lover since I was a kid. I knew not to reach for a strange dog, but I was still in that naive stage of life that had me wanting to believe in the goodwill of others or at least good sense. Both were a mistake at that moment, even though the answer came with the assurance of truth behind it, “Yes, he’s friendly. He doesn't bite.” So I lifted my hand to invite the dog to sniff it, to feel comfortable with me. For no visible reason, he closed the gap between us like a lightning bolt and sunk his teeth deep into my palm and the back of my hand. The pain, as intense as red-hot pokers driving through my hand caused me to fold up like an old cot, right in the middle, head at my knees. Rather than fighting the dog or pulling my hand away, the anguish held me there immobile and limp. Time later, I realized that saved me from graver injury. Without a struggling victim, the dog took one more chomp and then walked away as if nothing had happened.

A young man came out of nowhere and squatted beside me as I clung to my bitten hand with my other one trying not to faint or throw up. Both he and I could see the drops of blood hitting the concrete sidewalk and spreading into jagged-edged circles. He asked quietly, “Can I help you to sit down?” His firm arm around my shoulder made it safe to straighten up a bit, and I crept over to the nearest park bench. Only then did the dog owner cease his conversation and look to see what was going on.

“What’s the matter with you?” He literally flung the words at me.

The young helper answered. “Your dog just bit the hell out of her hand.”

Still he directed his comments to me. “What did you do to my dog that had him do that?” That was far too much to answer, especially with my teeth clenched against the pain.

“Your dog attacked her for no apparent reason,” my new friend said. Get that dog under control. I’m calling the cops.”

“Wait a minute. My dog’s never bitten anyone in its life. She had to do something that caused him to attack her. It’s her fault.” The dog was now sitting at the man’s side displaying the epitome of good behavior.

I wanted to defend myself. I had spent too much of my life falsely accused. But the nausea was real and my hand felt like it was on fire.

The park was patrolled by mounted police and as a small crowd assembled attracted by the shouting, one came trotting across the green. From his high perch, he could see the man and the dog with his small crowd, and me crumpled up on the bench with my sole supporter.

He dismounted and came to me first. The blood had now covered a noticeable area and the officer squatted down, locked my long brown hair behind my ear so he could see my face and said gently, “I've got an ambulance on the way. How are you doing?”

I couldn't answer. Keeping my mouth shut felt like the only thing that was keeping me from vomiting. So I just nodded. My hand was beginning to swell. I prayed the owner had a rabies tag on that beast and beyond that I was a study in just hanging on.

The only person who seemed to see what happened was the young man who helped me. He made a point to tell the cop what he saw. I didn't know why he was being so kind, if kindness was what it was. In that moment, a layer of innocence peeled off me like skin after a sunburn. Nothing made sense at the moment and that rattled me.

The cop then went to talk with the dog owner who was still insisting I was responsible for getting bitten. I heard him say yet again, “Toby here, he’s never bitten anyone. I think she was teasing him.”

“Teasing him how,” the officer countered.

“I was talking and didn't really see what was going on, but she reached her hand out toward him. Maybe she’s nasty and he sensed it.”

The cop's mouth curved in a crooked smile as he raised his hand to stop any further conjecture on his part. Then he asked, “Does the dog have a current rabies tag?”

“Yeah, I just don’t have it on this harness.”

“You've got 2 hours to produce it down at the station. If you don’t show with it in that time period, we’ll impound the dog and put him down. Up to you.”

The officer came back over to me. I had been watching his horse just stand there, not eating the grass or stomping impatiently. I wondered how long it took to train a horse to be that dependable. Dependable, a word that came up often in my conversations.

“You need to get that looked after right away; that’s why I called an ambulance, otherwise you might sit for hours in emergency, and you need a tetanus shot pronto and probably a few stitches.”

Finally, I felt like I could say a few words. “Officer, I didn't tease that dog. I asked the guy if he was friendly, and he assured me he was. I just stretched out my hand in case he wanted to sniff it, and for whatever reason, he lunged at me and grabbed my hand. I love dogs.”

“We'll check him out. Our dog people will take a look. But regardless, we can’t have dogs biting people in public places.”

I got the name and address of the young man who helped me and thanked him. He asked me to call and let him know how I was in a day or two. He felt dependable. I liked that.

I had a few stitches, but they like to keep dog bites open because they are “dirty bites,” that’s what the nurse called them. That way they can dress them daily to insure they heal from the inside out. By weeks end, the swelling was down but a yellow-purple hue still remained. I felt like going out and decided to call the young man, since he’d asked me to, and see if I could treat him to supper as a thank you.

It was funny how I kept calling him that young man as if I were old enough to be his mother. I’m thirty-three. I suspect he’s mid-twenties or so. Not that much difference. Maybe it would be fun.

I punched in the numbers he’d given me and listened to the ring. The voice of a young woman answered. I asked, “Is Josh there?”