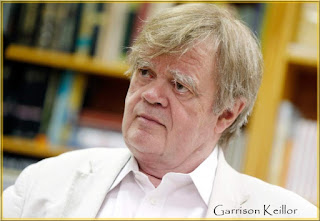 section of the Times this week: “The Garrison Keillor You Never Knew.”  As I wondered what this news story might be about, a not altogether endearing habit of mine—attempting to answer the question or solve the riddle rather than just reading the article—I realized this article was about something I didn’t want to hear. Garrison Keillor, the father of modern public radio programming through his production, Prairie Home Companion and the endearing, whimsical record of life in the Midwest, his tales from the fictitious Lake Wobegon, is calling it quits. His last show of Prairie Home Companion will be July 1 in, of all places, The Hollywood Bowl.

So what’s the big deal? For me, the real loss is in not hearing Keillor read from one of the most poignant yet funny catalogs of American life I’ve ever heard; tales from Lake Wobegon — the rich portrayal of this country’s heartland back when America felt like it was becoming aware of itself. Like a child growing up, it was as if this country sensed a life, a scene and a tale it needed to tell. Keillor told those stories. Interestingly, the article claimed that Keillor’s stories were not attempts at self-expression, meaning they weren’t his stories, but strictly from his imagination. Mind you, the writer cannot remove his take on those stories. We are all tied into perceptions, which unless we’ve worked a lifetime to remove ourselves from, are going to color the thoughts we put on a page.

But either way, the stories managed to portray the mid-west, that bastion of Americanism, in a way most could relate to and love. I didn’t even share that idyll, but still, these stories, written with unflagging honesty and yet no judgment, made it possible for someone as jaded as I was with American life, to just plain love the uncomplicated, forthright nature of the people Keillor introduced me to.

And yes, we people in our 70th decade grew up in the '50s, in retrospect a time not only of cold-war terror but also a people’s awe with a life moving away from the isolation and drudge of rural existence into the seeming magic of town living with the parallel awakening of home-based technological wonders. We may laugh at the naïve and child-like enthusiasm that our parents met this age with, but those snickers from these seeming more sophisticated times, I sense are laced with a tad of longing, a desire to be released from all the cynicism and chaos our lives now exhibit.

One of my favorite stories was entitled “Storm Home” told in retrospect by a man who as a child lived on a farm, but went to school in town. Such children were assigned a storm home, a family that would take them in during times when a snow storm blew in during the day, making it impossible for those children to get home. The storyteller in this case never got to use his storm home as no such emergency ever occurred during his school years. But that didn’t stop him from imagining a family that, of course, had none of the insensitivity of his own or the strict rules and lack of appreciation. His storm home family laughed a lot and loved him dearly and thrilled to his daily return. In his mind, they filled every wanting space in his life, and as winter began to close in each year, his deep longing to end up in his storm home ruled his days. Keillor, this most elusive, introverted and undemonstrative of individuals, picks his way through the lives of others, missing neither the irony of the stories nor the characters’ longings, yet tells their most tender secrets with a level of tolerance and respect that digs deep into the reader’s heart.

Keillor has plans that will keep his writing in front of his fans. A Washington Post column, a screen play and further books are on his To Do list. The idiosyncratic beginnings he brought to public radio made room for other unusual and addictive shows like Car Talk and This American Life. We have him to thank for that. He suffered no fools, and he captured a period of life in this country that we will never see again. A time when so much was new and fresh and buoyant.

We may never really know Garrison, but in this time of naked exposure on so many levels, I say hats off to Keillor’s seeming intent to keep it that way.

If you are still talking to your home-based children in this digital era, read them some tales from Lake Wobegon and see if you can’t instill in them the wonder and delight offered by an era they may not even be able to imagine anymore.