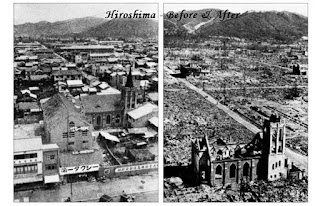 When I started to write this blog, I glanced at the calendar. The date was August 15, and it surprised me to note it was a red number on the calendar. I wondered what had happened on August 15 to warrant that. When I read the fine print, it informed me it was VJ Day, the day the Japanese admitted defeat nine days after the bomb fell on Hiroshima, confronting the world with, in the words of George Keenan, “The conquest by human beings of a power over nature out of all proportion to their moral strength.”  We had reached the point where we had become able to annihilate our species in a blink.

People often say things come in threes and so it recently was for me with, of all things, Hiroshima. After finding out it was VJ Day, I reflected on the fact that I had just watched the movie Mr. Holmes, the film version of Mitch Cullin’s stunning novel, A SlightTrick of the Mind. A significant and unexpected backstory involved Hiroshima. And that very week, I had started American Prometheus The Triumph and Tragedy of J. RobertOppenheimer, the so called father of the atomic bomb and project manager for the Manhattan Project that brought it into being.

I have had an inadvertent connection with Hiroshima since childhood. We had a small library in our home, unusual for families such as mine but a delight for me. I learned to read early and unbeknownst to my parents, I took books off the shelves and up to my room to read them. Dante’s Inferno was an eye-opener to a youngster such a me. I couldn’t understand the words, but the woodblock prints were quite an education. From there I moved on to a very thick book about Galileo. It took me a while to plow through it, but his life amazed me. Then one day I found this slim little volume with the title Hiroshima by John Hershey. I had no idea what it was about, but began reading it that night. To say I lost a modicum of my innocence by the time I had finished those 30,000 or so words would have been an understatement. It terrified me as it was still the era of the cold war where we would have drills at elementary school, filing down into the basement and facing the wall with our arms over the top of your heads. The teacher promised us if the bomb came this would save us.

We grew up under the seeming imminent threat of The Bomb, only I had the pictures in my mind of those six people in Hiroshima, whose stories of that day and beyond, the slim book told so vividly.
Like most things with human beings, taunt us long enough with any fearsome possibility, and we eventually find a way to accommodate the terror to a point of minor interest. It is a useful tool on one hand but a dangerous one on the other for it allows us to relegate critical issues to a place of seeming unimportance. Thus The Bomb is no longer a topic of conversation as it was in the 1950s, but in truth the potential misuse for it is considerably more possible today.

Our most acceptable cop-out is our agreement that as individuals we are powerless in the face of such devastating possibilities. And yet any country’s population has within its grasp the most awesome power for change – the views parents instill in their children. Unfortunately, if you watch preschoolers of this era, you would see an alarming rise in self-indulgence, violence and anger without the ameliorating capacity for respect for all that lives under the sun, which can be so deeply humanizing. Imagine that power inherent in atomic warfare in the hands of a new generation, which has never read that slim book, spending their childhoods instead watching unfettered violence on TV and in films while playing video games with the rest of their spare time where they can be administrators of death and destruction. Let us not delude ourselves. Tremendous power for change rests in the hands of parents if they are but willing to make parenting a true priority. We raise kids today, but far too few are actually parented.

I remember during my last year of university, being deeply disturbed by the Vietnam War. I heard through the grapevine that one of my professors, a world class organic chemist, was anti-war. Desperate for an adult view of all the concerned me, I knocked on his office door and asked for his help. Of course my question was a foolish one of youth. I asked him what he would do if he were I. To his credit, he took my concern seriously, however, and offered me a response that brings me a shiver even today. He leaned back in his chair and stared at the ceiling for some time. He said, while still looking there, “I was involved with the Manhattan Project.” Then he turned to me slowly, boring holes through me with his stare. He continued. “I feel to this day, I should have been more aware of the nature of that project. I was young. It was exciting. I can’t tell you what you should do, but I can tell you this. Whatever you decide be absolutely certain you can live with the consequences.”

The Bomb is real. The increasing level of violence and anger in this country is real. The group of people who have the greatest power to change our future are not those found at the nation’s capital or in the nation’s boardrooms. They are the parents of this nation and their power is real. The only question is whether they’ll take their role to rear thoughtful, humane children as seriously as my professor took his as an educator, when he stopped to share a terrible grief and a great truth with one young woman whose life was ennobled forever by it.