The Serendipity of Success

The stories of success that most enchant us are those that we, or those involved, cannot explain. That doesn't stop us from trying to figure them out, speculating on the possible causes or dismissing them as blind luck, but they continue to haunt us as they suggest a possibility we can’t quite grasp.

Maurice Sendak was an American illustrator and author of children’s books. He based his stories on childhood influences: his immigrant origins, the Lindbergh kidnapping, the concentration camp deaths of his extended family, which he found out on the day of his bar mitzvah, and parents consumed with anger and depression. He felt many children had experienced what he had at some level, not the same events but the confusion, fear and disempowerment they represented. Sendak wanted to share with his young audience what he considered the reality of most childhoods. He vowed he’d never lie to them. Needless to say, rainbows and sunshine were not part of his illustrations.

In 1963, Sendak had an idea for a book which he entitled Where the Wild Horses Are. His editor, Ursula Nordstrom, loved the idea and was purported to say the title was poetic and evocative. She offered him a contract, and Sendak set about working on the book. Several months into it, Sendak realized he had a problem. He couldn't draw horses. He wasn't a school-trained artist. Upon informing her that this project wasn't going to work, he met the business face of Ursula Nordstrom. In an “acid-tone[d] response” she asked what could he draw.

So his editor suggested another title, Where the Wild Things Are, perhaps with more sarcasm than was mentioned in my source.  Likely no one continued to grouse about it, however, because 19 million copies have been sold since its publication in 1963. Who’d have ever imagined? These ugly little character things, a boy who disobeyed his mother, a mother who sent her son to bed without supper (this was the 1950s, and they were no-no’s) and a “violent” story.

In a quote of Sendak’s, I found what I would call a clue to his “serendipitous” success. One I've seen before in similar tales. Here’s what he said:

"I'm totally crazy, I know that. I don't say that to be a smartass, but I know that that's the very essence of what makes my work good. And I know my work is good. Not everybody likes it, that's fine. I don't do it for everybody. Or anybody. I do it because I can't not do it."

The italics are mine. The two points are critical. The most pertinent question a creative being must be able to answer for himself is what is my art about. This doesn't mean defining a genre. It refers to what in you has to get out. Understanding that puts us in touch with the force governing point two, the “I can’t not do it,” part of an artist. That drive is not to be confused with obsession. It represents a depth of engagement that generates satisfying results and often notable art. Accepting these two realities often places a person in the path of serendipitous success.

Maurice Sendak knew what he was and who he was and didn't appear to be tempted to be anyone else. He knew also what was his to do, and he did it. This quote describes that awareness beautifully:

“Art has always been my salvation. And my gods are Herman Melville, Emily Dickinson, Mozart. I believe in them with all my heart. And when Mozart is playing in my room, I am in conjunction with something I can’t explain — I don’t need to. I know that if there’s a purpose for life, it was for me to hear Mozart. Or if I walk in the woods and I see an animal, the purpose of my life was to see that animal. I can recollect it, I can notice it. I’m here to take note of. And that is beyond my ego, beyond anything that belongs to me, an observer, an observer.”

To be successful, we must be infatuated with what we do, not infatuated with success. That cuts the job down to a size that we can engage with in the present moment.  And it also means that no matter what the outside world does, we experience ourselves as satisfied and successful. If along that way, life gives us notoriety and/or money, so be it. If it doesn't, we still have lived a life worthy of our time on this earth.

Sendak was sometimes censored and sometimes praised, but that 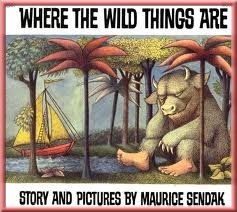 flux of human emotion didn't tempt him to change. It wasn't  money that made him successful, it was who he was that brought his art to a level that touched people and made the world pay attention.

Money often rewards that accomplishment, but it is not its progenitor nor is it a true measure of success. If you’re stuck on that point, meaning money is your motivation and your measure, you may miss out on serendipity and success.