Living on the Street

How close to the edge will you come, to know something you really want to know…? a short story by Christina Carson 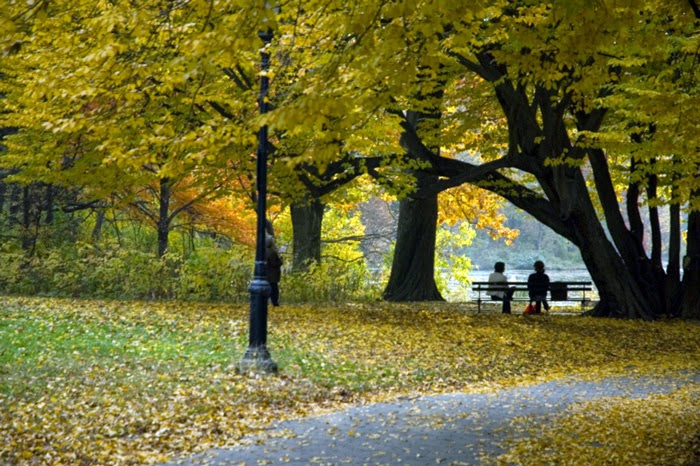 It was one of those gorgeous fall days. Leaves were beginning to mottle the grass still green from fall rains. The ones still attached to the park trees rattled in the now cool breeze sounding like old bones clacking together. Sadie lifted her face toward the sun as she walked idly along the cement path that mimicked the lake’s curves. The sun’s heat was no longer scorching and now felt soft on her skin.  Her hands, clasped behind her back, hung onto a small brown paper bag, her lunch. She had brought it to the park to eat away from all the noise and endless drama in the corporate scene where she worked. She often ate in this park and was fond of a particular bench under a clump of crepe myrtle trees just up from the lapping water. The spot felt like a natural shelter and at this point in her life, shelter was something Sadie sought in many forms.

As she rounded the last curve at the far end of the lake, she stopped, dismayed. Someone was sitting on her bench. She stood still for a moment fretting. She wanted to be alone, but she also wanted the comfort of her special spot. She studied the man who now occupied one end of the bench. He was sitting almost statue-like. A few pigeons had come up to see if he had any bread for them. He stared down at them and appeared to say something she was too far away to hear. His hands were folded in his lap, his long legs stretched out in front of him. The pigeons seemed to enjoy his presence for even without food, they pecked around his boots and stopped to rest in his shade. That helped Sadie with her decision. If the pigeons thought he was safe, perhaps he was, and she could share the bench with him.

As she got closer, she could see he looked a tad tattered. Street person, she thought. Hope he’s not schizophrenic or drugged up. She grimaced a moment as she noticed how much she’d changed. Years back she’d never have thought about that and it wasn't just changing times that brought up those concerns. She could feel how hard her heart had become, how pinched off from life she was. For christsake, she thought, I’m not the only 45 year-old whose husband ran off with a younger woman. But no matter how rational she tried to be, whenever her mind began to rummage through that heart-rending year, the pain of betrayal owned her before her next breath.

Still eyeing the man on the bench, she wondered, who was he? She huffed her breath out her nose as she realized what she had just thought, Was; who was he? Who was she for that matter, for she certainly felt more was than is.

She had been approaching slowly, but something about that last thought brought a resolute pace to her walk. Not wanting to scatter the pigeons, she walked behind the bench to the other end and looked at the man as she asked, “Mind if I share the bench with you?  I like this end of the lake best.”

He said nothing, nor did he look at her. She began to feel uncomfortable. About to excuse herself, she said, “I’m sorry…”  Still staring straight ahead, he raised his hand slightly. Then he patted the bench seat. She lowered herself onto the far end of the bench, offered him a quick little bob of her head and said softly, “Thank you.”

She followed his lead, stretched her trousered legs out in front of her and leaned back. She laid her lunch bag in her lap and began to quiet herself, since that tiny hint of rejection that had gone through her when he didn't reply had already started her heart thumping. The pigeons didn't come under her legs. She guessed she didn't feel very sheltering to them. What a basket case I am. If I think this behavior is so stupid, why can’t I stop it?

She scanned the lake, near tears, and attempted to get her attention on the mallards that were slightly off shore. “It will pass,” he said. The kindness in his voice made it almost impossible for her not to begin sobbing. “Don’t hold your tears in. Let them wash you clean.”

Her emotions were so conflicted now; she hardly knew what to do next. She studied him out of the corner of her eye. He had several days’ growth of beard reminiscent of the young lions’ in her corporate scene in their attempts to create an image they never quite achieved with their smooth skin and unweathered lives. Underneath the ashy pallor of the man, there sat, nonetheless, someone who felt solid. His fingernails were dirty, his clothing worn and a bit dingy, his hair wild from too few cuts and too many mornings uncombed, but still he appeared unapologetic. No, that wasn't quite it. He appeared to feel comfortable with himself. She wondered how that could be? How did he get to that place from where he was?

She began to open her lunch bag to the cheese sandwich, baby carrots and apple she’d thrown together this morning when she decided to eat at the lake. Absorbed in unrolling the bag’s open edge, he startled her when he said, “Are you comfortable now?” The bag fell out of her lap. She made three quick grabs to reclaim it before it hit the ground but with no luck. She scooped it off the grass imagining how silly she must have looked. “Apparently not,” she replied.

He smiled deeply, the way people often react to the easy comfort honesty brings to any moment. By then she had the bag open, the wax paper off the sandwich and was offering half to him. He took it not like a man who was hungry but a man who was touched.

He bit into the sandwich and asked, “Did you run out of imagination this morning?”

This time she laughed, “It is pretty dull isn't. I decided at the last moment to eat here, and this, she held the remainder of her half sandwich up before her eyes, was the product of that lack of planning.”

“Are you sure it was a problem of planning?”