What is it About Horses 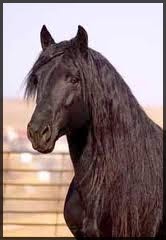 I grew up in horse country, the best luck I could have had as a child, for like so many young girls, I was possessed by the beauty and spirit of horses. I don’t know why that happens to so many of us young women, but it hit me rather hard about seven or eight years of age. That was after fueling my imagination by reading every book of horse stories in the library. So I moved on to something a bit less virtual.

I borrowed my doll’s blanket and took it down to our post and rail fence along the road’s edge. I threw it over the top rail, like a saddle, and tied clothes line to the post as if they were my reins. There I’d sit “riding” for hours hoping one of the many horses that lived on the farms around me might just come down our country road and the rider let me pet one. That close, I could slide my hand down their satin-like necks, catch their alluring scent and pretend they were mine. Yes, I had it bad, this love affair with horses. Some took pity on me, I understood years later, and let me pet their horse. Some, in a certain air of arrogance all too common to the horse world, which I was to come to know in all its meanness in my teens, ignored me and passed on by. But nothing deterred my drive to be around them. Until I could come up with something better, there I was day after day.

When I was nine or ten, fate smiled on me. I was to meet Pennsylvania State Director. I was visiting with a horsey friend my age, and she took me out to the barn where she kept her horse. I idolized her; she was a horse owner. The barn was one of those, huge old white-washed stone buildings with a loft and a cobblestone yard. Several stalls faced into that yard with Dutch 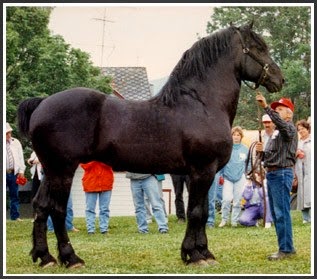 doors, so the top door could be open, letting each horse have a view of the world. None of the horses had their heads out that morning, so I began wandering around the yard peeking into each stall. As I walked about I noted hoof prints in the scant snow left over from a storm several days prior. I stopped at a set so large that both my feet fit in one print. They were outside one of the Dutch doors, but I couldn't see into it because the stall was raised up about six inches for some reason. So I leaned against the bottom half of the open Dutch door, my head even with its top and waited for my friend to return and explain these hoof prints that had caught my eye.

Without any warning, I was suddenly being lifted off my feet by my hair. I yelled out with the pain and that caused whoever it was to let go. Rubbing my head, I turned around furious only to be stopped dead by what I saw. There before me was the most extraordinary animal I’d  ever seen, his immense head bent over the door, his long and wild fore top shading black, penetrating eyes that looked at me as if he were God himself. He towered over me, and all I could do was gape in utter wonder. I had never seen any creature so beautiful, so wild looking, so massive. Unbeknownst to me, I had just met Pennsylvania State Director, four-time state champion in an era when draft horse competition was at its peak. He was a Percheron stallion. He was outrageously magnificent. And he appeared rightly to know it. 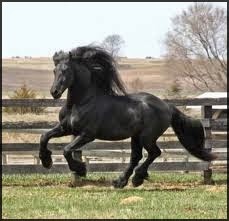 My love affair with draft horses started that day and stayed with me forever. My hair grew back, and I too moved on to horse owner, sharing the next eight years with a fine hunter-jumper who made my teenage time bearable. But deep in my heart, like that first love of your life, there lives to this day the memory of that superb creature, gleaming like shiny coal, mane wild and tumbling down his neck, tamed but unbent by any petty rules of man, the one, the only Pennsylvania State Director.

You can find my short stories on this site (see right column)
and my novels here.