You could say that’s why I write. I could have written non-fiction. Actually, I did for years. Then I realized the power is in taking the reader along for the ride. If I wanted to wake someone up to the fact that things are not as they so believably seem, people have to have an experience, something that cracks the smug certainty that they already know what’s true and what’s not. Fiction is a fine place to do that.

My experience came with a baptism by fire through a seeming innocuous course I signed up for while working with different First Nations people in northern Alberta.  The course in cross-culturalism was my introduction to the fact that how I saw the world was only one of many ways to see it. Don’t think I accepted that notion easily. I wanted to believe I could readily mix with and understand another culture, be helpful – you  know, the great white missionary syndrome. But the instructor guffawed cynically.  “You’re wrong,” was all he replied.

You didn't know me then. Those who did called me bulldog and not just behind my back. I took a verbal bite into the nape of his neck and said, “Surely there some fundamental level at which we can relate, something as basic as mother to mother?”

“Maybe,” he conceded slightly, “but your example isn't it.”

“See you tomorrow,” I threw at him with the cockiness that was going to be wretched out of me later that night.

I lay for hours trying to find an example that would prove him wrong. About 2:00 AM, I gave it up when I remembered reading about how Vietnamese mothers, in situations where a whole village in hiding was about to be revealed by their crying baby, chose to smother the child instead. I had held them as monsters. But that night, I realized they valued the life of community and family above that of the individual, while I been taught the individual was important above all else, honoring the actions of an entire patrol killed in the search for one of its own. And as I began to attempt to defend my view over theirs, I was introduced to a version of Einstein’s concept of relativity. Who could say who’s right? I was seeing the nature of the human mind, the human thought process, the product of bi-polar activity where there was nothing we could know or understand except through comparison. That meant our beliefs didn't represent Truth; rather they were the result of agreement, not universal law.

This realization ate at me, but nobody seemed to hear it through my non-fiction accounts. So I began to write fiction, sensing from my own experience how hard we fight against such ideas intellectually, but how tough it is to deny them when experienced. My challenge was to become a caliber of writer that caused people to experience contradictions, not merely read them.

In Dying to Know, Calli Morrow is in the throes of saving her life. So it is rather stunning for her to realize that the way she’s been taught to see the world is somehow involved in this life threatening 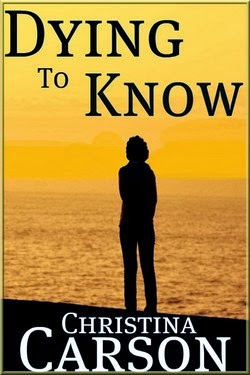 situation she finds herself in. She says:
“I knew in that moment, we were never meant to surrender our childlike innocence, to trade a world in which we fit like a glove for one that hung on us like ill-fitting hand-me-downs. However, all about us insisted on our membership. And instead of a handshake or a mystical password as entrance into this spurious society, we agreed instead to share a lie, the one that says we’re safe, secure, and fulfilled living this way.”

To her credit she works to undo that conditioning, attempting to save her life on many levels. That is an option for anyone who allows themselves to realize that their beliefs have no basis in fact.

Her Inuit friend, Joe Kuptana, a world-class Sculptor with a different worldview than hers, helped her on her way. He had just told her to engage more deeply with her art as a starting place for change:
“You mean I should engage with my artistic endeavors nonstop?” Calli asked Joe.

“I didn't say anything about artistic endeavors. When you live from your art, you know what’s real and what’s not, what’s true and what’s not.”

“So that’s why you get on me for endeavors that are art only in name?”

“Yes. The gift you waste is not the lack of turning out pieces to hang on the wall. You waste the experience of life as I learned it from my elders-direct, natural, with no pretense or lies.”

Even our present-day science has run into the wall our conditioning has created, for it too now knows there is no such thing as objectivity unless we separate ourselves from our conditioning and see what’s left.

Calli said it this way:
As if my normal flaws and limits fell away, I relived my innocence. That age before my vision clouded over like a sooty window letting light neither in nor out, before I accepted that beauty, joy and oneness had opposites.

Novels can take us to the truth in the midst of their fiction. It’s not that the reader necessarily feels what the protagonist does, but that the situation is vivid and trustworthy enough that the reader can chance touching that scene or situation with something other than their mind. It is in such a moment that truth speaks to us all.