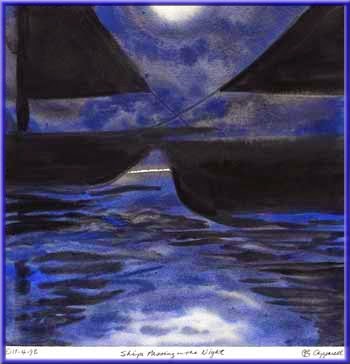 He was handsome, mid-twenties perhaps, dark-haired, dark-eyed, and silent, not exactly silent but remote, wary almost as if he were watching you even when his back was turned. His chiseled jaw appeared more an after effect rather than that which he had from birth. Intensity radiated off of him like heat off a fire. She could feel it across the room, and it caught her attention, attracted her strangely. She turned to watch him discreetly. She was stretching, and he was adding weights to his bench press bar. It was unusual for a woman to be in the weight room at the gym in those days, but it had become a natural habitat for her, the wife of a competitive heavy-weight weightlifter. It was a slow time in the weight room, mid-afternoon. That’s when she usually came. She felt awkward, later in the day, when it was full of men. Now there were just the two of them, and yet the space felt turbulent like the moments preceding a storm.

She started her exercise routine, and he sat on the bench watching. He made no attempt to be coy or surreptitious. Neither was he rude nor boorish. It was as if he’d been stripped bare of any desire to engage with the tiresome games of polite interplay, like a man with no lies left in him.

“You’re new here,” she said without looking at him. It was mid-semester at the university and the weight room crowd didn't usually change at that time of year.

“That I am,” he replied without reducing the directness of his stare.

“You in graduate school?” There was more latitude for graduates and that would explain his presence now.

“They let you in on that basis?”

“They don’t know what my basis is.”

“No you don’t.” The words came with certainty. He was a man setting some rules of engagement, and she noted it.

She picked up her dumb bells and started her next repetition. She wasn't sure how to respond. But after that set, her curiosity began to own her and she took a risk.

She tried a different route. “What’s your degree program in?”

“A study I find quite interesting,” she said.

“It’s not a study for me.” Again the response was uncommonly frank.

“A path then, a way to understand or make sense of something?”

“That would be right.”

She put her weights down and sat on one of the other benches.

“What would you say if I told you I just got back from Vietnam, and I went AWOL?”

“That’s why you’re here in Canada?”

“Yes. I need time to figure things out. They’ll be looking for me; my rank, my status, what I've seen. Then they’ll be coming for me.”

“I have no use for that war. My husband’s a dodger. That’s why we’re here.”

“Your husband? You don’t wear a ring, why is that?”

“We were forced to get married when we crossed into Canada. We haven’t reconciled to that yet.”

She had never been put in that position before. She had allowed herself the sense of owning her own life, not being ruled by a husband’s hand. She felt independent, like her own person, had her own friends, male and female, but she could feel where he was going, toward something more real, more honest. It was a place she’d avoided.  She stared at the floor unable to answer.

He chuckled in a knowing sort of way.

“Why did you go to war?” She wanted to change the topic.

“A family of war heroes. My father and grandfather graduated from West Point. A man’s got to find out who he is sometime. That was the way I chose.”

“Sounds like a simple question to answer, doesn't it? Well it’s not. But I did find out what a load of crap war is. And I at least found out that there is a limit to how long I’ll lie to myself. And that month I had to wait for an honorable discharge was a month too long. My father said, ‘Couldn't you have waited one month more? What a mess you've made of your life now.’ I really think he thinks that if I had just been discharged honorably, I’d be fine now. Fine now… what a laugh....”

To finish this story, click here.
Posted by CLC at 2:46 PM